This week in many regions of the world attention is given to witch culture and spirits, non-corporeal substances contrasted with the material body. We come in a period when it becomes earlier darker and people love to tell ghost stories and look into the matter of incorporeal or immaterial beings, such as demons or deities. Several people love to come in contact with wandering spirits, daemonsprites, supernaturallegendary creatures or ghosts. 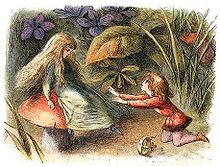 The prince thanking the Water sprite, from The Princess Nobody by Andrew Lang

In our regions there came a time (Middle Ages) those who practised the Old Religion and worked with herbs and charms were largely ignored by the church and the Inquisition. After the scourge of the Black Death, witchcraft trials began to increase steadily throughout the 14th and 15th centuries.

Add your ten cents, or pennies worth but be civil to others. Thanks Cancel reply